“Depending on your life experiences, crewing on RAAM will be the most amazing or awful thing you ever do, it may be both.”

These are the words of David Styles, summing up his experience as a RAAM crew chief in his RAAM Guide for the support Crew.

We are in the final stage of putting together our Team for our RAAM 2020 adventure. In the past, we received some requests from interested persons. In order to structure the teambuilding process, we established an area with descriptions for the different roles in our team including the possibility to apply online. Our goal is to have the core team ready by end of August 2019.

There is still space for a 4th and 5th racer, crew, photo, medical, mechanics and others ;-). Some details:

Each of our 4 racers will have their own following car (4 cars in total). Each following car will be a minivan with its own fixed crew of 2 persons, one driving and one navigating. The crew may swap roles as often as they want during the race/day/shift. While in active race mode, the car will follow the rider in short distance (at night within the light beam of the car). During her/his break, the cyclist will have to get the best possible recreation in the back of the minivan. Thus we are looking for experienced and calm drivers with additional talents (bike mechanics, medical, physio, …).

Expect – beside the pure driving/navigating job:

All this for 7-8 consecutive days with as little as 5 hours of sleep during each non-active shift.

The Team Captain is kind of the project manager of our RAAM2020 project. He is a crucial part of our crew moving from the west to the east coast in the US. During the race, we expect to meet challenges that go beyond the pure performance of cycling and driving. Even if we try to be prepared as well as possible, we will have to cope with difficulties that require a clear and calm head, the ability to find creative solutions and the decisiveness to implement them even if the might not be unanimous.

In addition to the general characteristics of a crew member, we are looking for a person who is:

So far we are one Norwegian cyclist, one German one and one hybrid. We are looking for one more to join our RAAM E2 Team. The 4 riders will split into 2 sub-teams with 2 riders each. Each sub-team will switch between an active and passive state in an 8-hour rhythm.

During the active race state one person will be cycling (followed by his minivan) while the other is transported in his minivan to the next exchange point. The riders will switch every 30 – 60 minutes, depending on circumstances like elevation profile, track, strength, temperature, day-/nighttime to mention just a few.

During the passive race state, the two sub-team members will drive to a motel, eat, sleep and prepare to take over at the meeting point the team in active race mode most likely will reach during their active shift.

As we don’t aim for a new record, good mood count more than strong cycling performance. Yet you should know what you are going to be 7-8 days on your bike (you have 2 of them). During your active state you cycle as constant as possible, not overpowering yourself, but still strong enough to bring your whole team a sound stage towards the finish line in Annapolis. While off the bike you get as much rest as possible, your next active state will come! And don’t forget: even if your 2 drivers will do everything possible to keep you going, they are humans too, most likely tired like a dog and happy for any support they can get!

Yes, in spite of participating in as a 4 person team, we need a 5th cyclist. Why? Things can go wrong (accident, health, …). Things can change (motivation, plans, …). And some team roles are easier to replace than others.

The 5th cyclist will prepare as if she/he would participate as one of the 4 main cyclists in the team. She/He will fly to the USA together with the other drivers, including bikes. If one of the 4 main cyclists for one reason or the other is unable to start (which can basically happen until 5 min prior to the start whistle), racer #5 stands ready and is saving the conduct of the project (and thus makes the rest of the team extremely happy).

If all 4 main drivers are able to start, cyclist #5 will join the team taking the role of a driver. Once the start whistle was blown, there is no possibility to substitute racers. If one of the 4 racers cannot continue, the remaining 3 will have to continue as a team of 3.

This is not a commercial undertaking, i.e. all E2 team jobs are unsalaried. However, the E2 RAAM 2020 project will cover expenses for the flight/stay/food/etc. Why you should spend 3+ week of your time in volunteering supporting 4 racers on their RAAM? There might be plenty of reasons: fun, challenge, experience,  preparation for doing your own RAAM one day in the future, being part of a wonderful team, opportunity to do something extraordinary, a once-in-a-lifetime chance, friendship, memories (also illustrated by a photo book), and many others.

The goal it to the team roughly in place by the spring of 2019.

We gathered Kjell, Axel and Peter in Oslo and Jürgen joined us via Skype from Karlsruhe for the kick-off meeting of our RAAM2020 project. 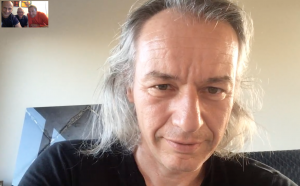 We identified the goals for our project:

Next steps will be:

A couple of weeks ago, Peter received a reminder from Axel saying: “If you mean serious with your participation in RAAM 2020, I’d recommend to start planning this summer. You will need the two years to get the best possible experience”. OK, enough talking … let’s move into action!

Step 1: register the domain RAAM2020.de and establish this blog.
Step 2: call for a kick-off …

The idea to participate in RAAM really gained momentum July 1st 2016. On Peter´s 50th birthday, he received not one but two RAAM related gifts: from his wife Kristin the allowance and support to participate in 2020 including the time-consuming preparation phase; and from his friend and RAAM record holder Axel the commitment to support the project with his invaluable knowledge.

Through his wife’s gift, the participation received its deadline: 2020

During the next couple of years, the plan slowly but surely matured in his head and the topic was addressed on several occasions with different people.

Peter’s good friend Axel Fehlau and his mate Anders Åsberg had the goal to finish RAAM in 2014 and take the record for Team 2, male, below 50. Peter followed the  preparation and conduction of this project, which planted the loose idea in his head to participate in RAAM himself. Not in a team of 2, but as part of the 4 riders team should it be possible. He started to communicate this idea to a couple of other people.

Take a look at RAAM 2014 with Axel and Anders

Many (about 20?) years ago, Peter watched a documentary about RAAM. He was overwhelmed by how much a human can perform if he or she decide to. For the years to come, one impression kept staying in his mind: a following car playing high volume songs through its roof-mounted loud speakers to prevent a rider from falling asleep while riding downhill (it must have been towards the end of the race while descending the Appalachians).

He tried to find the documentary on youtube, so far without success. It was about two solo riders, one sleeping 3 hours and the other one 4 hours. The three hour rest rider had an advantage in the first part of the race but was beaten by his competitor because rest is just too important to skip during such an endeavour. If you know the documentary, please drop us a note! Btw: there are a couple of films about various RAAM projects on youtube worth watching!